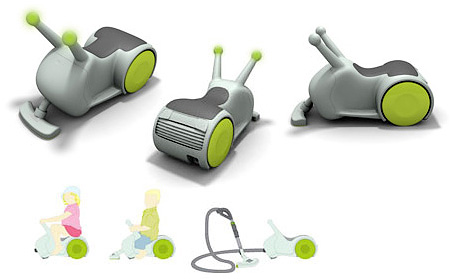 I think I might have to declare today ‘concept day’ or something. The Buster vacuum was created by designer .tina. as a thesis project for Philips. Given that a lot of children seem to be terrified by vacuum cleaners (or at least pretend to be scared to get out of housework) the Buster is designed to make the whole process actually seem fun.

When it’s time to vacuum the kids can easily ride-along since the Buster is designed with a built-in seat and handles that also gives it the appearance of a friendly snail-type creature. And when the vaccum is not being used it doesn’t need to be put away but instead can be left out as a kid’s toy. The hope is that the Buster will encourage kids to start vacuuming when they get older but we all know they’re a lot smarter than that.

[Buster Vacuum For Kids VIA red.house]

This 2018 Bubble Wrap Calendar Will Make Next Year Really Pop!