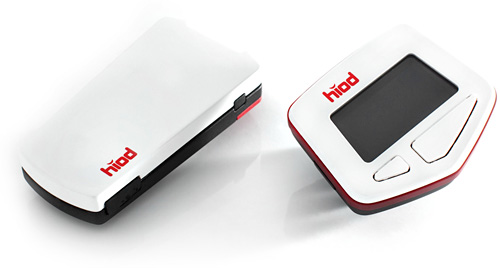 Remember the communicators worn by those serving on the USS Enterprise in Star Trek: The Next Generation? Well you can think of the HIOD One as kind of the same thing. Except that instead of being used on a Galaxy-class starship, it’s used by bikers. And instead of being able to communicate to the entire crew, even when off-ship, the HIOD One lets you talk to 5 other riders at a distance of up to 1,300+ feet.

The HIOD One system appears to be composed of three components. A handlebar mounted control unit that features a high-contrast OLED display. A voice unit that is worn on the rider’s arm, and a wireless microphone that attaches to the chin strap of their helmet. They all speak to each other over Bluetooth, allowing you to easily communicate with other riders while still paying attention to the road. And because the system does rely on BT, it’s also able to place and receive calls from your mobile phone, or stream music without you ever having to manually operate it.

Now I realize the whole TNG analogy I made was maybe a little ambitious. So perhaps comparing the HIOD One to a modern equivalent of the CB radio is a bit more accurate. And as for pricing and availability? It looks like the company behind the HIOD One is still looking for distributors and dealers to sell it. So it could be a while before you can get your hands on it.