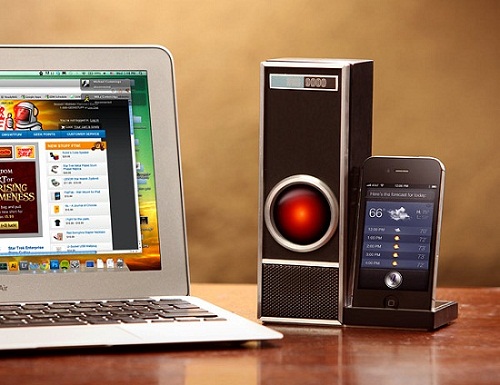 “I’m sorry Dave, I’m afraid I can’t do that.” These are words that almost every geek knows, and hopes that they never hear from a computer system. If they don’t ring a bell, they were the ones uttered by HAL 9000 to Dave Bowman in 2001: A Space Odyssey. HAL was an intelligent computer that was capable of making decisions, as well as (usually) following commands. Naturally, since Siri was introduced earlier this month, there have been a lot of HAL references. In fact, if you ask her about him, she will refuse to discuss the matter.

Well thanks to the bright minds at ThinkGeek, you’ll soon be able to transform Siri into HAL. This IRIS 9000 docking station features a remote with a single button that activates Siri. The station’s built-in microphone will pick up your voice commands, and Siri will respond as usual. The only difference is that the light in IRIS’s eye will flicker while she speaks. I don’t know about you, but I find that both creepy and awesome. For $60, this will also act as a normal docking station, a speakerphone and music player.