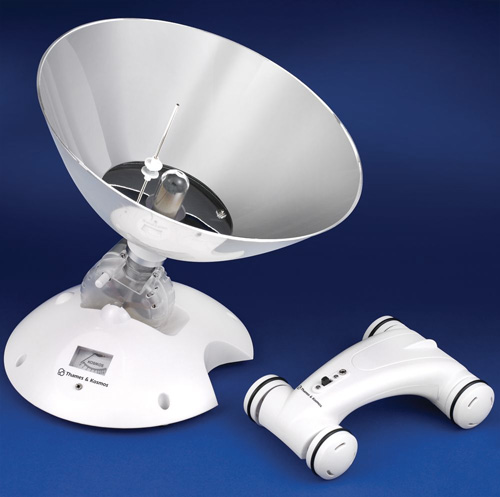 There are practical reasons why the production version of the Chevy Volt doesn’t look anything like the original concept they unveiled, and while I’m sure it will still sell well, there’s no doubt people would have preferred something that looks as futuristic as this eco-friendly toy car does, even if it’s completely and utterly impractical.

The charging station, which looks like it’s also involved in the SETI project, features an 11-inch parabolic mirror which reflects sunlight onto a Stirling engine where expanding and contracting air forces a piston to move up and down, which in turn powers a small generator. That generator can then be used to recharge the car’s AAA NiMH battery, giving it about five minutes of run-time on a 3-hour charge. Your kids might not be thrilled about having to wait 3 whole hours just to watch this thing race across the floor for 5 minutes, but at least they’re learning why the Stirling engine never caught on. (That’s the lesson here right?) $200 from Hammacher Schlemmer.