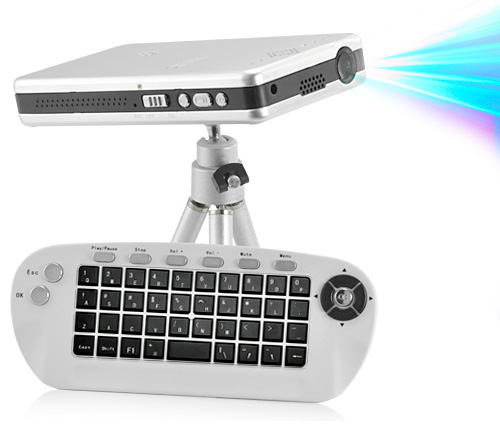 Were we in the market for a pocket-sized projector we’d probably be eyeing the AAXA L1 Laser Pico Projector we reviewed back in the Summer. But admittedly it’s lacking a couple of cool features that this LED-based compact projector has. Like Wifi and that snazzy little wireless keyboard. Powered by a Linux-based custom OS the projector doesn’t really have a full-fledged desktop UI, but it does allow you to access online photo galleries and videos from sources like YouTube, in addition to offline content from an SD card or a USB flash drive.

Chinavasion is currently selling it for just north of $200, which isn’t that expensive. Just keep in mind you’ll have to settle for 640×480 VGA resolution, a limited 10 lumens of brightness and a maximum of 2 hours of battery life, presumably when using it as sparingly as possible. In terms of file format support it’s pretty robust, happily playing MPEG1, 2 & 4 files, VOBs and DIVX/XVID clips, and the included remote makes entering a wifi password far easier than with with the projector’s limited buttons. Oh and that fancy mini tripod is included too, which from my experience will come in really handy.