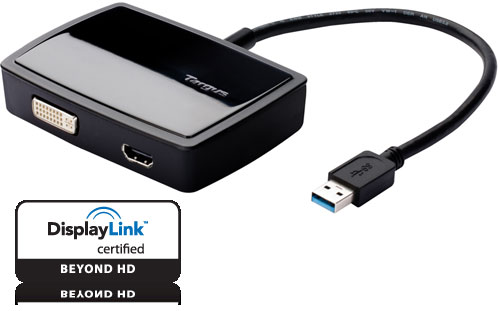 For people with all-in-ones, small form factor PCs and laptops, if they want an additional screen (or two), the best bet is an external video adapter which works work well for PCs lacking the space for an additional video card inside. Granted, some of these machines come with a HDMI jack but even with that, you only get two displays at most. The Targus USB 3.0 Dual Video Adapter is worth checking out if you want scalability. It simply needs one USB 3.0 port and has both DVI and HDMI to drive resolution up to 2048×1152 which is good display up to 24″. Should you want to further expand desktop estate, you can always get another one. USB 3.0 has plenty of bandwidth for applications like this. The Targus employs the DisplayLink DL-3900 chipset as it’s the only one in the DL-3xxx series to boast dual head output.

Installation on Windows PCs is very easy and the adapter even gets HDCP 2.0 certification for Blu-ray and iTunes movies alike. The USB 3.0 video adapter can also carry 16-bit 48kHz 5.1 surround audio through its HDMI port. Another big plus is the DisplayLink USB video chipset being able to offload all of the heavy lifting of HD video playback and 3D rendering to the GPU. During Everything USB’s tests, the Targus adapter is actually able to render 3D game graphics as capable as the system’s main GPU.

The USB cable, tethered to the adapter however, is strangely short and stuttering with 24p playback was noted. Despite the caveats, the Targus works well for most users and sells for about $99, making it reasonably priced by most accounts. Anyone looking to add monitors to their notebook or desktop computer for increased productivity will want to give this adapter a closer look. That is assuming USB 3.0 port is available.

Get Up to 63% Off on Amazon Best Sellers: Anker Wireless Headphones, TaoTronics Soundbar, and VTech Kids Smartwatch

Get Huge Savings on These Essential (And New) Smart Home Bundles