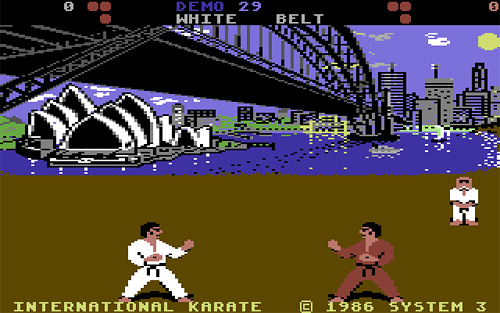 While fighting games like Mortal Kombat, Street Fighter and even Super Smash Brothers remain some of my favorite titles from the past 20+ years, you never forget your first. And for me that was International Karate on the Commodore 64. For being a C64 game the graphics in International Karate were actually quite good, but I guess when you consider the game just consisted of a couple of sprites bouncing around, it’s not surprising the developers were able to include some impressive backdrops like the Sydney Harbour Bridge, the Sphinx and pyramids in Giza and even the New York skyline.

Of course International Karate came out well before the days of finishing moves, fireballs and other gimmicks, and was basically just a couple of guys (quite possibly twin brothers resolving an eternal grudge) duking it out using nothing but their karate skills. You scored points or half-points based on the hits you landed, and the first player to two points won the round. And in the event the clock ran out, the player with the highest score claimed the victory. There was also a series of great mini-games you got to play at the end of each stage like breaking stacked blocks with your head or jumping/ducking to avoid a barrage of throwing knives. Who needs fatalities anyways?

International Karate was definitely one of the staples of my C64 (you could tell because it always had a home near the front of the diskette box) and from what I recall, the fighting mechanics and control were actually pretty decent. However, I distinctly remember one little quirk that drove my friends and I crazy. Besides moving your character around and punching and kicking, you were also able to control which direction they faced. Now in modern fighting games the two opponents automatically turn to face each other if they cross on screen, but that wasn’t the case with International Karate. If you jumped over your opponent (or simply walked past them) you had to make sure you turned around in time, otherwise you basically set yourself up for a fist in the back of the head. It wasn’t the prettiest way to win a fight, but to a kid a win is a win.