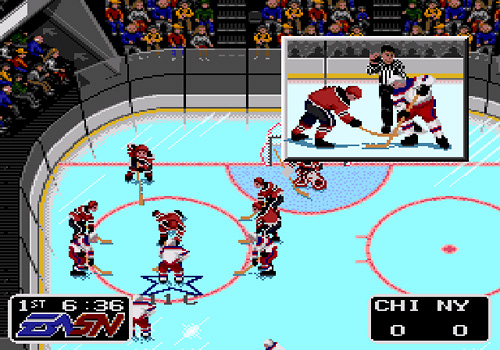 While last week’s NHL Stanley Cup for the SNES was a genuinely enjoyable title, it really couldn’t hold a candle to the most recent entry in the EA hockey franchise at the time, NHLPA Hockey ’93. It’s still regarded by many (and immortalized in a certain ‘money’ film) as one of the best video game hockey titles of all time, and it definitely remained one of the staple cartridges for my SNES. While NHL Stanley Cup had the license for the NHL teams but not the players, NHLPA Hockey ’93 was just the opposite, with actual players’ names and numbers, but no actual NHL teams. But in the end I think having the license for the actual players who were bona fide celebrities to my friends and I was far more important, and it helped make the game a bigger success.

At the time, NHLPA Hockey ’93 was considered the must-have version of the game because in the ’94 edition the blood, violence and fighting that made the game extra fun for teenagers like myself, was removed. It seems the NHL and NHLPA felt it was harmful to the sport’s image, and they demanded that EA remove those elements from future games. They were eventually put back in a few versions later, but their removal helped keep NHLPA Hockey ’93 popular for years to come.

Unfortunately, just like NHL Stanley Cup suffered from the unfortunate ‘dump the puck’ bug I mentioned last week, NHLPA Hockey ’93 had a similar and just as annoying glitch. Basically the goalie’s AI prevented them from switching sides of the net fast enough during a wraparound shot, which resulted in a guaranteed goal if there were no opposing players to stop you behind the net. In fact, since neither my friends nor I could be trusted not to use the trick, we ended up having to create unique variations on the game, like pulling the goalies altogether, just to keep it interesting.

And of course let’s not forget NHLPA Hockey ’93’s most awesome feature, the instant replay. It made rubbing in a particularly sweet goal or body check even more satisfying as you replayed the event over and over and over again, much to the annoyance of your opponent. In fact their only response was to just sit there and take it, or trip the reset button on the SNES console, which as I recall was how half the games actually ended during our own regular seasons.