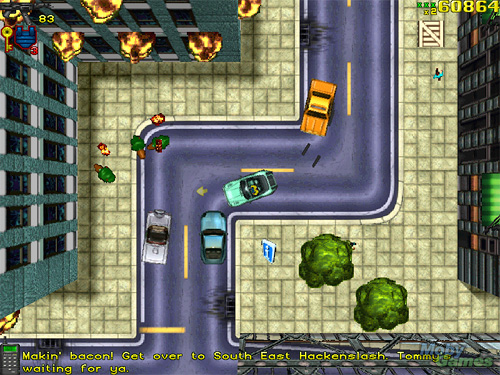 It really wasn’t until the infamous third iteration of Grand Theft Auto that the game became a target for the media and the poster child for video game violence. But believe it or not, many of us were stealing cars and committing unspeakable acts of civil disobedience long before GTAIII was even announced. That’s right, while it might have lacked the fancy 3D graphics of its descendants, the original Grand Theft Auto was still a heck of a lot of fun. The game featured a top-down perspective of the original versions of Liberty City, San Andreas and Vice City, and relied heavily on sprite animations for the cars and characters, though 3D effects were sparingly used for the buildings and other elements.

Oddly enough, I don’t remember seeing the original Grand Theft Auto pop-up on the evening news in stories about how it was corrupting our youth, even though you could pretty much do everything you can do in the current versions of the game. I guess sprite-based characters just aren’t as endearing or realistic as their modern 3D counterparts.

One of the reasons I really liked the original GTA (and its sequels) was the sandbox approach to the gameplay that basically allowed you to ignore the missions, and just drive around ‘having fun.’ In fact I rarely completed a single mission in the game, even though I played it for hours on end. And while it might not be the most admirable thing to be remembered for, we can’t forget that it was the original GTA that first introduced us to the phrase, “Kill Frenzy!”