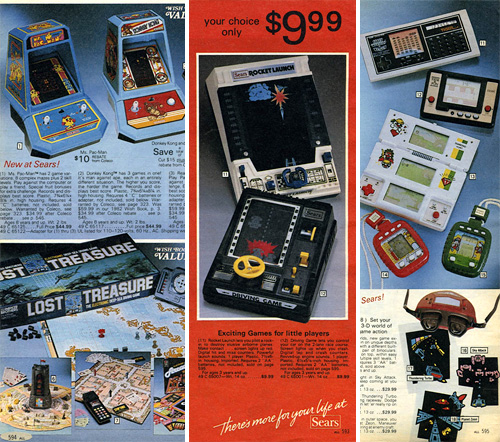 I’ve been racking my brain for the past few weeks, but I just can’t remember ever playing a video game that had some sort of Christmas theme to it. I know games like that existed, but I like to keep this column limited to titles that I’ve actually played. So instead, for this week’s special ‘Christmas Edition’ of The Games We Played, please enjoy these scans of video games and systems from the 1983 Sears Wishbook catalog, courtesy of The Retroist.

Let’s face it, before the internet or you were old enough to hang around with the weirdos at your local computer store, catalogs were really the only place where a kid could get information about what new games and systems would soon be available. And since 1983 was the year of the great video game crash, this particular Wishbook features everything from the Odyssey 2 to the Vectrex and even Merlin! I can remember a lot of these systems being on my Christmas lists of yesteryear, and to be honest, I wouldn’t mind finding a few of these under the tree this year either.

[ The Retroist – The Video Game Systems Of The 1983 Sears Wishbook ]