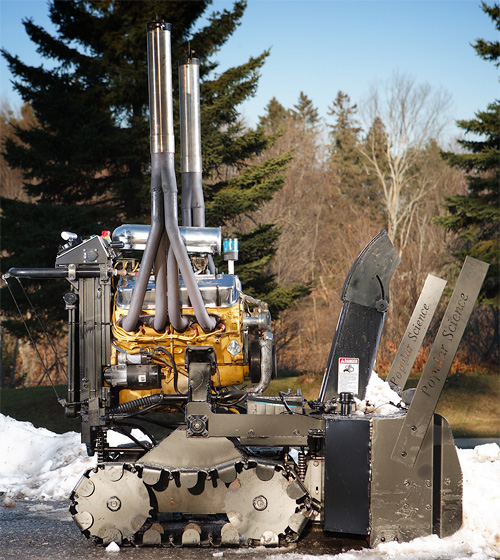 While most of us would just leave a discarded V8 engine sitting on our front lawn until the grass grew high enough to hide it from the neighbors, Kai Grundt decided to use his to build the mother of all walk-behind snowblowers. Now you have to understand that not only is Kai a metal fabricator by trade, but he also lives in a small town called Muskoka (north of Toronto) where the winters can be particularly harsh. So having a V8 powered snowblower actually seems practical, instead of just insane.

Once it was built, Kai’s snowblower tipped the scales at over 800 pounds, so he opted to switch from rubber tires (which couldn’t bear the weight) to custom made tracks that are powered by a couple of hydraulic motors fed by a pump powered by the V8 itself. The massive auger on the front of the blower spins about twice as fast as those found on a conventional (translation: boring) snowblower, which not only allows Kai to clear more snow, but throw it farther too. How far? Try 100 feet easily, which is far enough to bury his neighbor’s truck under snow from two houses away. Almost makes me wish I had a driveway, or at the least, be thankful that Kai isn’t my neighbor.