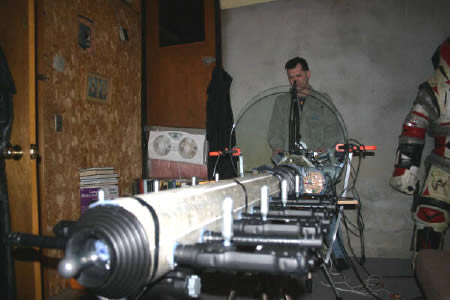 I like the French. Rally, I do. They have nice wine, nice cheese and the very nice baguette. I wasn’t even one of those who got their panties all up in a bunch over their Iraq stance (being Canadian probably helped a little). It’s just that once in a while they come up with stuff that makes you wonder if they’ve had a little too much of that wine.

Now, I say French, but really, reading the article, I can’t be sure. It’s from a Canadian website and the name Hurtubise is typically French-Canadian (I’d know…). So it could be that he’s one of the French’s little brothers, and in that case, maybe things make more sense (French-canadians, please take no offence). See, the reason I’m all up in arms about this, is that Mr.Hurtubise is claiming to have invented a light source (strangely phallic in appearance) that when shone on a surface will allow you to see through it. And that, my friends… just sounds nuts!

Now, never mind that some laws of physics will have to be re-written just to accomodate this invention, the mere sound of it is reminiscent of so many other “free energy” contraptions that have been popping up here and there (see this). And stanger still, is that people are pouring money into this. Namely: The French. Maybe I’m just one of those narrow sighted naysayers. Maybe I’m too cynical. Whatever the case, I do wonder… why do the French want to see through walls so badly?