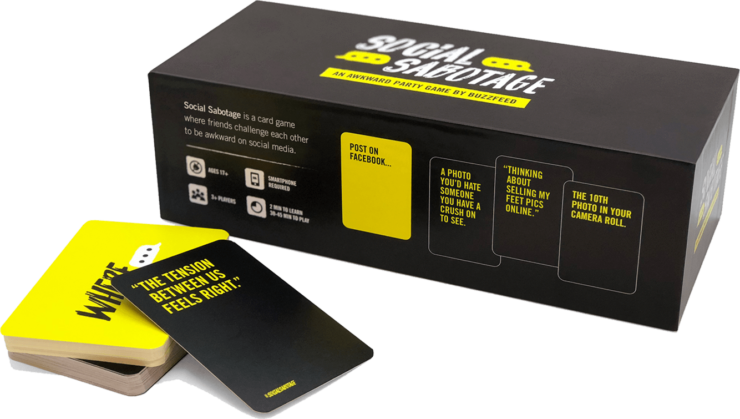 Buzzfeed, those people that steal content online and repost it as their own, have come up with their own card game that steals a little from Cards Against Humanity and a little from Truth or Dare. It’s kind of original, but really stupid. Let me explain.

The game is called Social Sabotage, and it’s pretty much exactly like CAH in the sense that there are situational cards, and people play their own funny cards to complete the sentence. The only difference is that you’re supposed to do what ever embarrassing thing people come up with. For example, you play a “Send your mom…” card and the other players decide to play “A video of you twerking.” And you’re supposed to actually do that.

It’s a fine idea, but yea, no one’s gonna do what the card tells them. Oh, let me post some ridiculously awkward thing to this girl I like, or you know, we could just watch Stranger Things season 2 and throw this game away in the garbage, that’s an idea too.

Other than putting yourself in a horrifically awkward post, there’s not much humor in the actual cards themselves, so just play Cards Against Humanity.

$25 will get you Social Sabotage at Walmart, or a Cards Against Humanity base set on Amazon. The choice is yours.