Since E3, there has been some speculation about Sony adding some cellular capability to it’s already popular PSP. Popular in Japan that is. On this side of the pond, we’re still gritting our teeth. 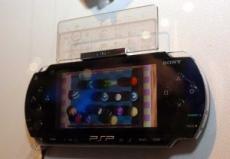 Now, Sony’s COO is adding some fuel to the story by… flat out telling us about it.

Now, if you ask me: Who on earth would want to use the PSP as a cellphone? I mean, the unit looks awesome… but stuck to your ear? The word ungainly comes to mind, no? Or maybe it’s meant to be used to add some sort of online gaming functionality. I imagine we’ll find out soon enough.

This iPhone Case Moonlights As A Lint Brush